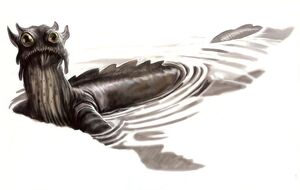 Star Wars
The Nos Monster is a large non-sapient predator found in the sinkholes and underground water bodies of planet Utapau. Nos Monsters have huge eyes in order to see in the darkness of the caverns. They are aggressive creatures, specially when protecting their young.

It is unknown if the Nos Monster/Varactyl/Swamp Slug common ancestor lived in Utapau or Dagobah. The idea of two closely related organisms in different worlds might support the theory of panspermia.

Behind the scenes[edit | edit source]

Retrieved from "https://aliens.fandom.com/wiki/Nos_Monster?oldid=163159"
Community content is available under CC-BY-SA unless otherwise noted.