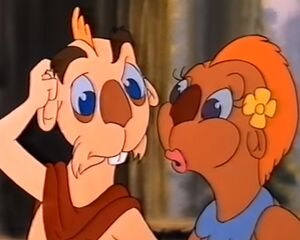 Star Wars
Norky's species are an unnamed race of sapient marsupials which inhabit the forest moon of Endor.

Members of this species are mammalian creatures similar to an Earth kangaroo. They stand slightly shorter than the average adult Ewok and move around by hopping on their long didactyl feet. A marsupial pouch is present in both males and females, and even in juvenile individuals, and can be used to store several items. They also have long prehensile tails which can be used to manipulate objects.

Nothing is known about this species, except that they're known to form family units and care for their children. They seem to be on friendly terms with the Ewoks and speak the same language as them.