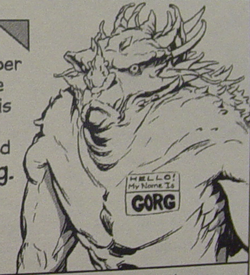 Nimrog from book The True Meaning of Smekday

The True Meaning of Smekday universe

Nimrogs, commonly known as Gorg or Takers, are a sapient species from Milky Way Galaxy.

The True Meaning of Smekday Edit

Nimrogs are aggressive reptilian humanoid species. In same point of history, they starting cloning their species and all later Nimrogs were clones of individual male called the Gorg. Nimrog is above 2.43 meters tall (8 feet) and they weigh 1 kiloboov (unit using by Boov species), and in Nimrogish units of measurment he is exacly 1 Gorg tall and weight a Gord. They are well-build with one horn on their nose and many horns on their head and backs, along with armor on their backs. They bodies smells awful. All of Nimrogs are left-handed and enjoy musical theater. Nimrogs never getting sick but all of them have allergy on Earth cats.

The Gorg's reptilian body is just armor, and their actual bodies are slight small molluscan with orange skin as well they resemble starfishes with 4 arms and echinoderm-like tube feet. Their young grown in special incubators. Children have pink skin and move on 4 legs when adults on 2.

The True Meaning of SmekdayEdit

Boovish scientists say that the earliest form of language, Old Nimorgish, was based on frase "to punch".

On their native planet they they waged many of wars between countries and fractions including Three Hundred Years' Civil War, during which we used weapons of mass destruction (probably atomic). There is believe that this war have started over parking space.

Sometime later Nimrog civilization reach space, it started conquering other planets and sometimes trading with other species. After ending all wars on their homeworld, they started subordinate the planets that, officially, had bad governments in order to free people living there. Many people noticed, that Nimrog are just attacking planets with good restaurants.

In 1991 (In Earth time units), they conquer Boovworld and banish its native species, Boovs from it. In 2013 they attack and conquer Smekland (Earth), that was in this time under Boovish rule. During occupation they got allergy to cats and tried to exterminate cats population and after it didn't work out, they left the planet.

In 2010s Nimorgs (The Gorg) were threatened with extinction with only one adult individual (Commander K-trong). This time they conducted long war with Boov species about Boovish colonies. During peace negotiations representative of Boovs, Captain Smek escaped before words were swapped taking a Nimorgish incubator, that contain entire next-generation, as war spoil. After that, Gorg Commander was chasing Boovs, tracking their new colonies thanks to transmitter in incubator and compliantly destroying their planets. Incubator was returned to the Nimrog by captain Oh on Smekland (Earth), ending Nimrogish-Boovish war. After that the Nimrog leave the planet, deciding to not destroy Earth.

Retrieved from "https://aliens.fandom.com/wiki/Nimrog?oldid=186030"
Community content is available under CC-BY-SA unless otherwise noted.