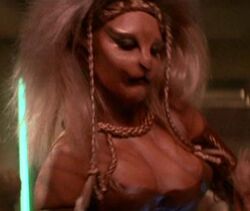 Unknown (one lived on Nimbus III)

This is an unnamed species of sapient humanoid beings, one of which worked as a dancer in Paradise City, on the planet Nimbus III.

Members of this species possess striped skin, vaguely feline-like facial features and a tail. They also notably possess three breasts, rather than two as is most common with humanoid females.

Judging by the dancer's behavior, it's possible that this is a highly animalistic race, as she produced cat-like vocalizations and leaped on James T. Kirk to attack him.

Retrieved from "https://aliens.fandom.com/wiki/Nimbus_III_Dancer%27s_Species?oldid=146431"
Community content is available under CC-BY-SA unless otherwise noted.