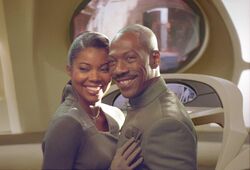 Meet Dave
Nilians are extremely tiny humanoids from the planet Nil who lack emotions (likely due to their culture not seeing it as a necessity towards existence). Very similar to Humans, they come in a multitude of races or subspecies.

With their homeworld seriously threatened by an energy crisis of salt, the Nilians were forced to invade the planet of the "giants", Earth. To accomplish this, they first sent a small sphere capable of draining the Earth's oceans to harvest the salt within (perhaps through black hole or teleportation technology). Despite their precautionary procedures taken by encapsulating the sphere into a small asteroid, it failed to meet quota. Fearing the worst, the Nilians built a Human-sized spaceship in the likeness of its Captain-to-be, which was christened as "Dave". Once on Earth, the Daveship was damaged and soon, the Captain fell for a single mother named Gina Morrison.

Chaos ensued aboard the vessel as the crew witnessed Human emotions, evoking the same sort of responses in their own species, which naturally are quite "boring". Some crew members began to fear that a virus had taken over much of their allies, and that something must be done. Soon enough, the Captain was mutinied out of his own vessel, and his second in command, Number 2, took the helm to wrought destruction and retake the sphere.

Eventually the Nilians decided that it was not worth the destruction of the Humans' homeworld (and the subsequent extinction of all of its life) to save their own, and they moved on to find another source of salt to utilize.