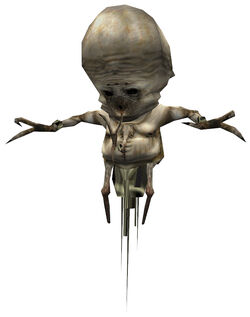 The Nihilanth was the leader of the Xen forces that invaded Earth during the Black Mesa Incident. It appears to speak broken English, though this is more likely to be due to telepathy more than anything else.

He is known as the last of his species, and has enslaved the Vortigaunts to serve him while he hides out on Xen with his Stalkers. Though the Nihilanth itself was never captured by the Combine, others of his species may have been and it is known that after a long conflict, he was the last of his kind. This is considered strange as he refers to his kind and likely his people as well as "their slaves".

Though his intentions originally seemed malicious, it would retroactively appear that he and his kind were simply attempting to escape from the Combine, and used the portal's opening as a means to an end, though his mocking of Freeman and Freeman's later being praised by the Vortigaunts for his killing the Nihilanth indicate it was a cruel being only serving itself. Although this might be more due to his hatred of Freeman having killed so many of his minions, it is hinted at that this is not true..