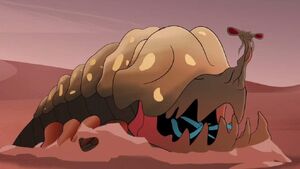 Nightwatcher Worms are nocturnal giant worm-like species native to Jakku. These beasts can ruin a scavenger finds by eating them. Some believe that the worms are responsible for the Sinking Sands. Needless to say, these creatures would make quite some terrible pets!

Retrieved from "https://aliens.fandom.com/wiki/Nightwatcher_Worm?oldid=180961"
Community content is available under CC-BY-SA unless otherwise noted.