The Nibblonians stand about one foot tall and have two large eyes, as well as a third eye on an antenna in the center of their foreheads. They have black fur (leaving them prone to hairballs), with pale yellow circles on their bellies and around their mouths. The males have fangs but the females don't. They are widely considered to be the cutest race ever to exist, though this is something the Nibblonians resent. 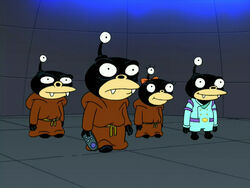 Memory wiping (via their eyestalk)
Interdimensional travel via swallowing themselves

The Nibblonians are a proud, ancient race, their history extending 17 years before the universe existed. Brilliant and powerful, since the dawn of time they have battled their ancient nemesis, the Brain Spawn.

The Nibblonians live extraordinarily long lives. It is not known at what age, or even if, they die of old-age; all that is known is that they can live far in excess of 1,000 years. They seem to eat only meat, and in prodigious quantities. They regularly consume many times their body weight per day, without gaining weight. Nibblonians have a "cuteness reflex" that kicks in when they are scared or in danger.  It causes them to act like helpless, adorable creatures. As waste, they excrete pellets of Dark Matter, an extremely heavy material that is valuable as a starship fuel. The mechanism by which meat, which is made of ordinary matter, is converted into dark matter inside the Nibblonians advanced digestive tract is unknown, it may be based on a kind of black hole or pocket dimension, whatever the case; Nibblonians are capable of swallowing themselves to leave the universe for safety. The Nibblonian eyestalk is capable of emitting several types of energy that can wipe memories or burn skin.