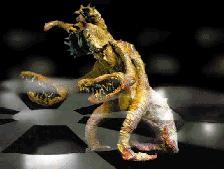 Star Wars
The Ng'ok, commonly known as the Ng'ok War Beasts, are foul-tempered creatures which are usually accompanied by an awful smell. Their most notable physical trait is a pair of razor-sharp retractable claws and a tiny lashing tail. Many systems commonly employ them to guard and frighten off potential foes.