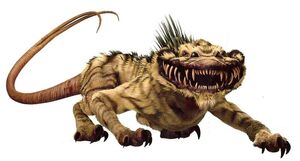 Star Wars
Nexus are non-sapient predators native to planet Cholganna. With approximately 4.5 meters in length, including their long thin tail, and 1 meter in height, Nexus have a large mouth full of sharp teeth. They are agile and fearsome hunters, being able to climb trees and chase down Arboreal Octopi in the forests of their home planet. Nexus have four eyes, and are able to see infrared light. Their body is covered in fur, and they also have spikes on their back, likely for defense.

A Nexu was in a Geonosis arena with a Reek and a Acklay. to kill Padme Amidala. Although the beast was able to scratch the former queen but Padme managed to put down the Nexu. The Reek controlled by Anakin Skywalker then charged on the feline and knocked it down with a powerful horn, killed it.

Sculpture of a nexu
Add a photo to this gallery
Retrieved from "https://aliens.fandom.com/wiki/Nexu?oldid=175006"
Community content is available under CC-BY-SA unless otherwise noted.