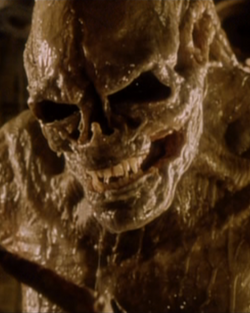 None (created aboard the USM Auriga)

Alien
The Newborn is a new breed of Xenomorph, which perfectly combines the DNA of a Human and a Xenomorph into a highly efficient killing machine.

The Newborn had softer skin, rather than the hard rigid exoskeleton of other Xenomorph breeds. It also had more Human proportions and a head shaped like a Human skull with eyes deep in the sockets and feral fangs. It has red blood, although the acidity of this blood is unknown. Unlike pure Xenomorphs, the Newborn lacks certain characteristics such as an inner jaw, a tail, and dorsal tubes.

The Newborn's teeth are sharp enough to penetrate bone.

The Newborn has incredible strength, being stronger than an ordinary Xenomorph.

The Newborn lacks the offensive adaptations of pure Xenomorphs, namely the inner jaw and tail.

The Newborn displays limited emotions, which is uncharacteristic of Xenomorphs but expected of a Human.

In short, the Newborn acts like a Human baby who does not yet understand the repercussions of its actions with the addition of more violent instincts and so much strength that it is unable to carefully control what it is doing. This is shown when it was reportedly playing with its kills while humming tunelessly.

It was created when scientists of the United Systems Military cloned the body of Ellen Ripley from DNA apparently removed from her upon her crash-landing on Fiorina 'Fury' 161, which contained a developing Xenomorph Queen. Once removed from the clone, designated Ripley 8, the Queen continued her cycle of laying eggs. However, the Queen developed a second stage, which involved the creation of a womb, which was inherited from the DNA exchange from Ripley.

The Newborn emerged from the womb and identified Ripley 8 as its mother before killing the Queen by smashing the front of her face, not accepting a Xenomorph as its mother. The Newborn died when Ripley 8 purposefully damaged part of the escape ship's window with her acidic half-Xenomorph blood, causing the Newborn to be sucked into shreds through the small opening.