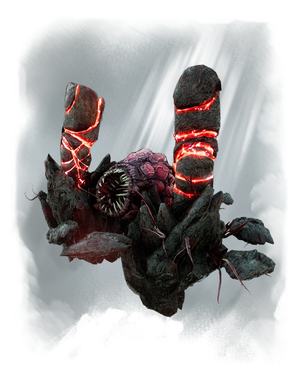 Fade to Silence
The Nest is a sessile abolmination that arrived with the numerous other eldritch horrors from their dimension to reek havoc on the human world.

The Nest, compared to the other eldritch monsters, is actually not very violent all by itself. Its body is made up of a single fleshy orb on the ground, in between two glowing red pillars. Its mouth is circular and with rows of circling teeth to grind up meat.

While not seen hunting, it's presumed it hunts in some form as some specimens were found with canines trapped inside them.

The Nest, while non-violent, is still highly dangerous due to its ability to form Corrupted Grounds, which are seemingly the same habitats the eldritch horrors live in back in their own dimension.

Retrieved from "https://aliens.fandom.com/wiki/Nest?oldid=187582"
Community content is available under CC-BY-SA unless otherwise noted.