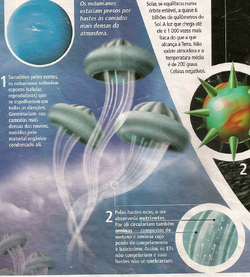 Their appearance is reminiscent of jellyfish, but the long "tentacles" are actually root-like structures that go down for kilometers, anchoring the aliens to the denser atmosphere layers, which are rich in organic composts used as a convenient food source by the Neptunians. They reproduce by spores, much like Earth fungi.

Besides nutrients, the light blue "blood" running inside the alien's stems also contains amines, substances with a very low melting point, which prevent the fluid from freezing and the stems from breaking.