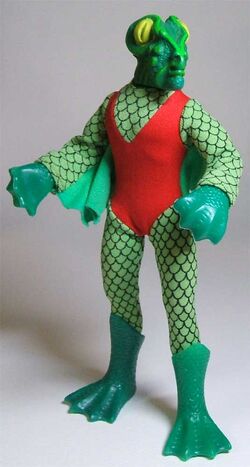 Star Trek
Neptunians are a species of seemingly-amphibious humanoids, presumably native to the planet Neptune, or one of its moons.

Neptunians are green-skinned, vaguely reptilian-like creatures with four-fingered hands, four-toed feet and bulging yellow eyes. Their hands and feet are webbed, suggesting an amphibious lifestyle. They also have a loose membrane hanging from their arms and connected to their bodies, which probably also aids in swimming.