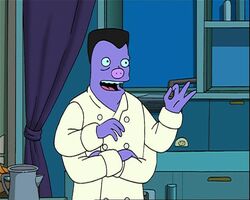 Futurama
Neptunians are a humanoid species which shares many characteristics of humans.

There are a few differences though: Neptunians have pig-like noses, purple skin and four arms. Their hair is usually black, but can also be brown (Spanish Fry) and violet (Teenage Mutant Leela's Hurdles). Because of their many arms, they are usually masters of coordination and can use all four arms simultaneously, giving them an edge in terms of multi-tasking and dexterity. The Neptunians make up a fair share of Earth's alien population and have their own quarter in New New York, Little Neptune, with its own foodshops and similar things. Neptunian cooking is quite famous, and is furtherly promoted by the most prominent member of the Neptunian people, Elzar.

A few Neptunians are in the service of Robot Santa Claus, but he is constantly mistreating them so they are forced to take desperate measures in order to survive. Because Santa doesn't feed them, this kind of Neptunians are a lot smaller than their compatriots on Earth, rendering them of similar proportions to the mythical elves who serve the less homicidal, more traditional Santa.