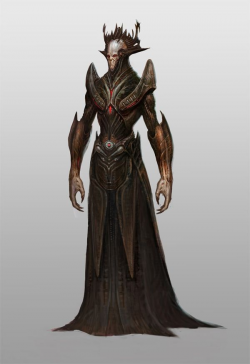 The Neph are a splinter faction of the Eloh and the main antagonists in Tabula Rasa.

After the disastrous war with the Thrax, a division occurred within the Eloh. Many wanted to resume contacting and teaching other races, choosing to regard the Thrax as an aberration, but some wanted to take a more cautious approach. They wanted to guide other races into more subservient roles so that the Thrax War would never happen again. This second faction called itself the Neph and, when neither side could convince the other, attacked and slaughtered their pacifist brethren with the help of the Thrax.

The Neph, felt that the cost of sharing the knowledge and advancements the Eloph had spent thousands of years achieving was far too great. They believed that less advanced cultures were not worthy to bestow this knowledge upon, and instead, these races should be given "guidance" to ensure that the Neph always retained their rightful place as a superior race.

Retrieved from "https://aliens.fandom.com/wiki/Neph?oldid=181975"
Community content is available under CC-BY-SA unless otherwise noted.