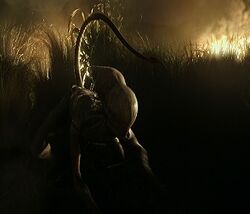 First born on the planet referred to as "Paradise" or "Planet 4".

Highly aggressive towards any living lifeforms.

Through implantation of an endoparasitoidic embryo into a living organism's blood via fungal spores. These spores are released by a fungal pod that has been infected by the Black Liquid.

Alien
Neomorphs are a subspecies of Xenomorph encountered by the USCSS Covenant on Planet 4, a.k.a. "Paradise", in 2104. They seem to have originated from indigenous creatures mutated by the Black Liquid.

Like the Xenomorphs, the Neomorphs have a complex multi-staged endoparasitoidic life cycle, although theirs is different in that the eggs are small, fungal-like egg sacks; the "facehugger" stage is replaced by microscopic airborne spore-like creatures known as motes; and the "chestburster" stage is replaced by a similar creature known as a bloodburster.

The adult Neomorph also differs from the typical adult Xenomorph in a number of ways, especially by their smooth pale white skin, in contrast with the Xenomorph's dark chitinous exoskeleton. Both species are terrifying predators with enormous physical resilience, and employ both stealth tactics and brute force to take down their prey. However, Neomorph blood doesn't seem to be acidic, and they don't seem to form hives like the Xenomorphs.

Additionally, Neomorphs are far more animalistic in behaviour and almost always feed on their prey after they kill it, unlike Xenomorphs, which generally prefer to cocoon some of their victims to save them for future implantation. The Neomorph's animal-like nature might suggest a lower intelligence. Neomorphs, like the Deacon, also lack an inner mouth.

Neomorphs enter their host's body through airborne mobile spores, known as "motes", normally through the ear or nose, and gestate inside the host's blood. These spores; which behave more like a swarm of microscopic insects in their ability to actively seek out orifices to access the host's blood vessels; are released by clusters of fungal pods growing on "Paradise" planet that have been altered by the black pathogen.

Unlike Xenomorphs, the young Neomorphs can erupt from various parts of the host's body, brutally clawing their way out. One observed specimen emerged from its host's back, while another emerged from the host's mouth. The emerged creature is known as a bloodburster, similar to a Runner Xenomorph's chestburster in that it already has fully developed limbs and moves in quadrupedal posture. The bloodburster is exceptionally strong for a creature of its size and seemingly fragile composition. Unlike most chestbursters, which prefer to flee and hide from danger, a bloodburster is very capable of defending itself. Both its gestation and its maturation are extremely fast, occurring over the span of mere hours.

The first Neomorph spores entered Ledward's ear and he rapidly became sick. Ledward was brought back to the landing ship, where the first Neomorph emerged from his back and killed Karine before chasing Maggie, who accidentally killed herself by shooting an explosive. However, the Neomorph survived and escaped. The second Neomorph emerged from Hallet's throat and escaped into the night as well.

The first Neomorph then returned, now a subadult, and attacked the surviving crew violently, biting Walter's hand off and tearing Ankor's face apart with its tail before being fatally shot by Rosenthal. Hallet's Neomorph returned (now grown into a toddler) and leaped at Rosenthal, mauling her arm until they were rescued by David, and it escaped back into the night. David led the survivors into the destroyed city where the Neomorph followed them, tracking and killing Rosenthal. Soon after, David arrived and attempted to communicate with the Neomorph. For reasons not entirely explained it did not attack David (possibly because it recognized him as a synthetic, and therefore not a food source). However, Captain Oram killed the Neomorph by shooting it in the chest, which greatly annoyed David. These remain the only documented encounters with this species so far. 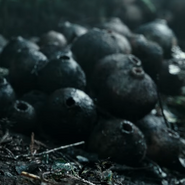 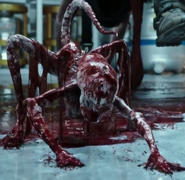 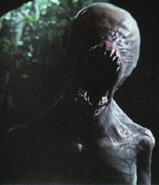