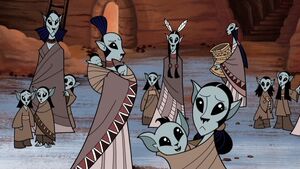 The Nelvaanians were a race of caninoids native to the planet Nelvaan. At the time of the Clone Wars, the Nelvaanians were a simple people, living in small tribes without any thought of planetary government and the galaxy at large. Also known as Nelvaans, these beings distinguished by their greenish-fur and jet-black eyes, and their fearsome appearance belied a deeply spiritual nature.

Much of their tribal tradition was based on the family unit, which was based on an extended collection of blood relatives and closely-related acquaintances. Although the males of the family unit were the warriors and scouts, the females were the most important members of the group. They were the builders and gatherers, as well as being responsible for raising the Nelvaanian youth of the family.

Each tribe was led by a shaman, who could be either male or female, and their chosen mate. The shaman was believed to have been chosen by the Great Mother to ascend to his or her position, eliminating any form of competition.

During the Clone Wars, the Nelvaanians believed that they had encountered the individual known as the holt kazet, or Ghost Hand. Legend held that this individual would arrive on Nelvaan in a time of great need, and help the Nelvaanians regain their freedom. The appearance of Anakin Skywalker led many Nelvaanians to believe he was the holt kazet, a belief that was only strengthened when he passed all the tests of a local shaman before rescuing the tribe's males from a Separatist laboratory.

Retrieved from "https://aliens.fandom.com/wiki/Nelvaanian?oldid=184310"
Community content is available under CC-BY-SA unless otherwise noted.