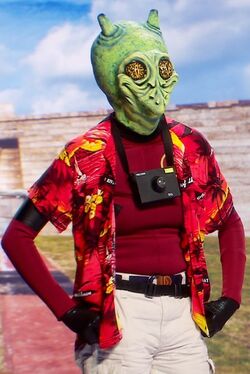 This unnamed alien is a friendly, green-skinned humanoid creature who visited Earth at some point as an interstellar tourist, who thinks he fits in with the Humans when he really doesn't. He has large, gecko-like eyes and makes bird-like chirping sounds with his multiple nostrils.

Retrieved from "https://aliens.fandom.com/wiki/Nelson%27s_Alien?oldid=181218"
Community content is available under CC-BY-SA unless otherwise noted.