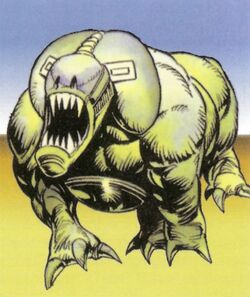 Star Wars
Neks, perhaps better known as the Cyborrean Battle Dogs, are a vicious and primitive species that are bred by the Cyborreans on both species' homeplanet of Cyborrea. They are used as beasts of war used during the many battles which near-constantly erupt all over their planet, but have also become hot black market items. They are fitted with both armor and cybernetic implants in order to make them more resilient, fearless, increase their battle prowess, and to allow the Cyborrean handlers to properly control the creatures.

They are known to have been used by the planet Rutan's King Frane to hunt Kudana. The king's youngest son, Taroon, would eventually attempt to use modified seeker droids to destroy the kennels they were housed in in a failed attempt to frame his older brother Leed to cause him to lose his chance at the throne; however, Taroon was stopped by the Jedi knights Qui-Gon Jinn and Obi-Wan Kenobi. In 40 ABY, Ben Skywalker was attacked by a pack of wild Neks on the planet Ziost, although he survived the encounter.