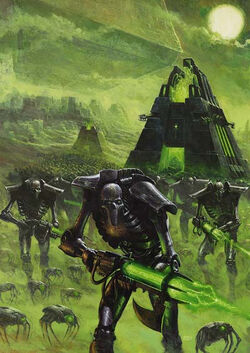 Highly aggressive, will generally kill any living creature in sight

Created by the C'tan

As Necrontyr, extinct. As Necrons, active.

The Necrons are a humanoid race of robotic skeletal warriors that have lain dormant for more than 60 million years. Originally the Necrontyr, the Necrons were once the servants of the C'tan, until Szarekh, the Silent King and one of the most powerful Overlords, betrayed them. Necron technology is superior to most, if not all others in the universe. The Necrons were created when, as vengeance against their ancient enemies, the Old Ones, and by the trickery of the Deciever, the Necrontyr shed their organic forms for the living metal known as Necrodermis What they didn't know was that by becoming one with the Necrodermis, the Necrontyr race would be rendered extinct. Thus, the Necrons were born.

After becoming the Necrons, the Necrontyr were left devoid of emotion, no more than ruthless, undying killing machines. The Necrons then set to destroying their old enemies, but were interrupted by the Enslavers, a race of Warp entities that used psychic individuals as a conduit for more of their kind to enter the universe. Unable to find enough sentients whose souls could feed the C'tan, the Necrons went into hibernation, waiting millions of years in their Tomb Worlds for the return of sentient life.

All Necrons are driven by one goal: to restore their lost empire. This immense task is made more difficult by the fact than many Tomb Worlds were destroyed, along with the Necrons hibernating within them. Yet countless billions of necrons still remain. The Necrons, as they aren't an organic species, possess the ability to repair themselves during the battle. Most injuries that would kill a human, such as the removal of limbs or the severing of the spinal cord, will only slow a Necron warrior. Only by inflicting such destruction to the Necron's body that its regenerative ability cannot keep up can you truly kill them, but then it'll just "phase out", its body returning to the stasis-tombs beneath the planet until repairs can be completed.

Retrieved from "https://aliens.fandom.com/wiki/Necron?oldid=185287"
Community content is available under CC-BY-SA unless otherwise noted.