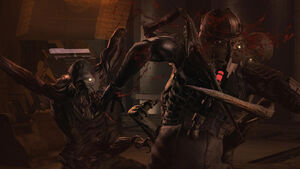 Variable depending how many corpses are available to infect

The Necromorphs are the reanimated bodies of the dead, revived and reshaped into horrific new forms by recombinant extraterrestrial genes. These creatures are extremely aggressive, and will attack any non-necromorph on sight. The sole purpose of almost all Necromorphs is to create more bodies to spread the infection, while the role of one particular creature, the infector, is to specifically infect non-necromorphs to make more of themselves.

Injuries that would kill an ordinary being, particularly the attack on necromorphs of where the vital organs of the host organism would be, have little effect on them, and conventional methods of attack require tremendous skill to kill or even damage them.

Countless people have died due to not knowing the Necromorphs' only vulnerability: cutting their limbs off. The only effective way to "kill" a Necromorph is to shoot or cut enough of its limbs off to disable it (arms and legs). Because of the fact that the vital organs that were once in the torso and chest area of most necromorphs made from human corpses have been mostly replaced by muscle by the necromorph contagion, attaking the chest and torso areas do very little to stop them. It is only wasting your ammo, time, and energy. For most necromorph forms, decapitation (cutting off the head) also does little to stop them.

The actual type of Necromorph created depends on the location and circumstances, as well as the host body's current form (for example, Lurkers are created from any infant human, or dogs). It is worth noting that some Necromorphs are clearly comprised of more than one human (see Brute), which is an indication that some bodies may be allocated for more efficient use. This is a sign of greater intelligence in the form of planning and effectively utilizing resources. The bacterium responsible for the infection is also referred to as "The Corruption".

All Necromorphs are extremely hardy and capable of surviving in lethal environments due to the fact that they do not need to rely on organs for respiration. As experience shows, shooting them in the torso, or even the head is ineffective. While it does inflict damage on and will kill them eventually, it is extremely wasteful and potentially lethal; a person may waste a large amount of ammunition, or may be attacked by other Necromorphs while they are concentrated on one.

The Necromorph infection seems to be not only limited to humans, but to all other creatures except the creators of the Marker. This fact is not confirmed completely, but the novel Dead Space: Martyr describes a Necromorph fish which behaves like all other Necromorphs, as it attacks another fish in order to kill and infect it. This also proves that Necromorphs can survive under water. Although no direct evidence of other species being transformed by the infection, the capabilities it possesses for altering the bodies of the dead for any purpose means there is potential for them to use any species available.

Necromorphs are highly aggressive; they attack any non-Necromorph being on sight, regardless of species or age. The sole purpose of this behavior is to spread the infection quickly. Despite being viewed as mindless killing machines, the creatures sometimes display tactical planning and cooperative behavior. They commonly hunt in small packs (see Pack) of mixed individuals with semi-specific roles, and use stealth, ambush, or group tactics to outsmart their victims. This requires a degree of strategic thinking, and points to a certain amount of individual intelligence and communication. Examples of this include using ventilation shafts to sneak up on prey, playing dead, not attacking until the victim is well within striking range or their back is turned, or using a lure to draw known threats into an ambush.

It is strongly implied that the Necromorphs share some form of collective intelligence; on Aegis VII, a Necromorph known as the Hive Mind was encountered, and it was believed to be the central "brain" of the Necromorphs' group consciousness.

Creatures not currently engaging a non-Necromorph target have been observed as performing several different behaviors. Many will wander aimlessly, almost passively, with no real destination, until they are aware of a new victim to kill that they will immediately engage. Some will drag bodies to a different location, possibly to make it easier for an Infector to find. Some will hide themselves inside ventilation shafts, setting up new or resetting previous ambush sites. Some will simply stand in place, waiting for a new victim to come to them. When a target is present but out of range, they will often watch the victim and attempt to intimidate them with loud growls and threatening poses.

Beyond pack tactics the creatures have never really been observed to directly interact with one another (other than the Stalkers, and The Pack see below). They do not audibly talk to one another, they do not touch each other in a social sense (though one might get in the way of another during an attack), and they have not been recorded exchanging more subtle chemical signals between each other, i.e. pheromones are never mentioned.

The scope of their behaviors is expanded upon in Dead Space 2 with the introduction of Stalkers. Outside of the Hive Mind, Stalkers seem to have the strongest sense of pack cohesion and individual intelligence shown from Necromorphs, as they will often peek around corners to lure Isaac while another will charge from a different direction. They are also the only known Necromorphs to directly communicate with one another. The noises they make seem to hold some significance, e.g. the Stalkers will make a noise while or just after Isaac has moved his location, alerting the other Stalkers. It is also possible that they communicate with each other, such as the Pack.

In Dead Space 3, it can be seen that when Necromorphs are left idle for years at a time, they curl up in a hanging patch of the Corruption to conserve their energy and wait for unsuspecting prey. This results in the Necromorphs becoming mummified in the process if left in this state. An example of this is seen when Isaac enters the dilapidated CMS Roanoke, a 200-year old ship in orbit over Tau Volantis. A form of Necromorphs called Wasters are seen carrying melee weapons, something that is odd for Necromorph behavior as they never wielded man-made tools before.

The following event happens 200 years before the events in "Dead Space": The necromorphs actually originated from their bacterial basis dubbed 'The Corruption' by researchers. The Corruption was created by scientists through the code written on the Marker, which was a DNA sequence to create the pathogenic bacteria.

The first cultures synthesized by said code did not grow, despite placement in ideal bacterial conditions. The scientists deemed it a failure, but when they opened an opportunity for the bacteria to react to dead skin and hair cells when one of the cultures was incompletely decontaminated, what resulted was fascinating: the culture grew after regenerating the dead cells and other material with which it had come into contact.

From then on the scientists discovered the potential of the corruption as it could reanimate any type of dead cell (hair, waste, nails,). As the corruption grew, many scientists started to experience violent hallucinations, and several scientists were killed as a result.

One scientist who placed a body in quarantine, found that the corruption had morphed the body into a 'leaper' necromorph. During this time, hallucinations experienced by the scientists significantly increased.

Unknown organic growths were discovered around the lab indicating the bacteria had escaped its quarantine. Those killed by the bacteria changed into necromorphs. The behavior of the bacteria explains why necromorphs kill: they are determined to procreate.

Scientists then discovered that the marker was creating some sort of "dead space" which makes the necromorphs and the corruption lay dormant. They then created an artificial marker which had a dark crimson colouring to create this 'dead space' aura. This new marker, and the necromorphs born of the dead scientists, were then left to rot on Aegis 7.

In the 26th century, mankind had found a new way to survive: planetcracking. Through planetcracking, planets are literally dismantled to reveal their precious ore and metals beneath the crust. The planets are then mined into nothing but asteroids.

The Ishimura, the largest colonial mining ship, was prepared for a planetcrack on Aegis 7. Five years before, a colony was established to research its geological features in response to Ishimura's planetcrack.

As research continued, researchers found positive results and had also found an alien artifact. Strangely enough, 200 years before it was discovered, an alien artifact was found on Earth which, apart from its reddish color, looked exactly the same.

The second marker was quickly embraced by Unitologists: a religious cult which had now grown large after the discovery of the first marker, their purpose being to study the existence of life. A large portion of the Ishimura's crew were members of this cult, as were many of the colonists. The Unitologists claimed the marker was a sign from a higher power, and therefore it was divine.

Shortly after the discovery of the second marker, various Aegis 7 colonists started experiencing massive hallucinations followed by assaults, exhibitions of schizophrenia and strange behaviors, but not all were affected. Non-unitologists started to blame the marker, but they were ignored.

Believing that the marker would lead them to a new life in a new form, the Unitologists saw it as their right to study the markers exclusively. A mass suicide then took place involving more than 40 members of the religion, under the assumption that they would rise to a new state of being.

Behind the Scenes[edit | edit source]

The name 'Necromorph' comes from the Greek words Necros (corpse, in the sense of dead) and morph (form), literally "dead form".

The necromorphs come in a variety of different types, including:

On the spot mutations can result in an enhanced version of regular necromorphs, their bodies are more durable to perforation (For example, enhanced slashers).

Necromorphs have very little weaknesses: they can easily withstand a barrage of bullets and Necromorphs can only be killed by dismembering their limbs until they are completely dead. Even then, Necromorphs don't really die, considering they're already dead in the first place, so much as become disabled. However, some Necromorphs require more than dismembering to be neutralized. They also have an origin connected to an ancient obelisk called the Marker, which was built by an unknown race. Humans found it on Earth, and cloned it. It was activated on Aegis 7, which killed everybody there and caused a Hive Mind to form. The Red Marker is able to suppress the Hive Mind.

Retrieved from "https://aliens.fandom.com/wiki/Necromorph?oldid=187581"
Community content is available under CC-BY-SA unless otherwise noted.