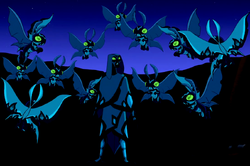 Blue and black (traditionally)
Various others (varies by individual)

Ben 10
Necrofriggians are a genderless species of moth-like sapient beings from the planet Kylmyys.

Though they are generally humanoid moth-like aliens with a pair of wings that can fold themselves into a cloak and skull-like heads, two distinct types of Necrofriggians have been observed. One has a physical structure similar to that of a Human while the other are more muscular and slightly taller, their body frame being similar to a Neanderthal.

Necrofriggians reproduce asexually once every 80 years, devouring metal to use it to build a nest for their eggs. Upon hatching, the newborn Necrofriggians will first eat nest made of metal before they instinctively fly to their ancestral homeworld Kylmyys so they can feed on solar plasma.

Necrofriggians have an appetite for metal and solar plasma.

Similar to Ectonurites, Necrofriggians can become intangible like ghosts. They can also turn partially invisible.[1]

Necrofriggians are capable of flying due to possessing a set of moth-like wings.

Necrofriggians can form manipulatable ice constructs from the ground by touching it. They also freeze objects by either touching or phasing through them.

Necrofriggians are strong enough to effortlessly rip apart large metal statues, snap iron girders in half, and carry Revonnahganders while flying. Their strength extends to their prehensile feet, being able to carry an Opticoid while flying.

Necrofriggians are highly adaptable, being able to breathe underwater and survive in extreme heat, intense cold, and even the vacuum of space. Similarly, they can drink molten steel.

Necrofriggians can withstand radiation, such as that generated by a Prypiatosian-B.

Despite some of them having a frail appearance, Necrofriggians are durable enough withstand laser blasts to their backs.

Similar to Ectonurites, a Necrofriggian's intangibility is consciously used, which means they cannot use this ability while caught off-guard. Similarly, opponents who are also intangible will cancel out each other's intangibility.

Necrofriggians are vulnerable to electricity, such as that generated by a Cerebrocrustacean.

Necrofriggians are sensitive to high-pitched noises, such as those produced by an Evolved Sonorosian.

A Necrofriggian's ice breath can hold a species that generates heat or acid, such as Methanosians, Gourmands, and Prypiatosian-Bs, for a limited period of time before they thaw themselves free.

Necrofriggians can be temporarily constrained in an Anodite's Mana bubble until they phase their way out.

Necrofriggians are vulnerable to being hypnotized, especially by a Psycholeopterran.

There is a limit to a Necrofriggian's durability, as they can be knocked out by a Celestialsapien.

Necrofriggians cannot create living snowmen because their powers are not magical.[2]

Necrofriggians speak using gravely voices, and some of them tend to make ice-based puns.

Necroffriggians from Mikd'lty are devoted to sacred objects, the desecration of which they see as sacrilege. 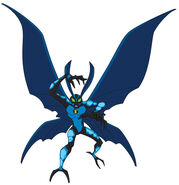 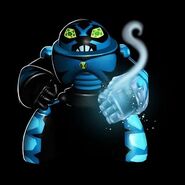 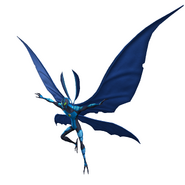 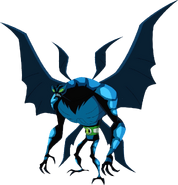 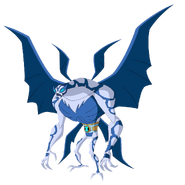