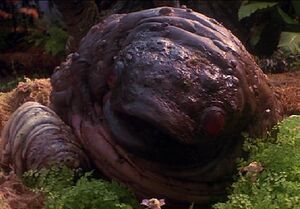 The Dark Crystal
Nebries are docile, non-sapient amphibianoids native to the swamps of planet Thra. Although these stout creatures have an amphibian look, they also show typically mammalian traits, including small quantities of fur and the ability to produce a milk-like substance, presumably used to nourish the young. Skeksis are particularly fond of roast Nebries and will often kill the gentle beings to devour them in their banquets. The Podlings, on the other hand, domesticate Nebries for their milk. When the creatures die, the Podlings may also make drums out of their skin and clothes out of their fur.
Retrieved from "https://aliens.fandom.com/wiki/Nebrie?oldid=155292"
Community content is available under CC-BY-SA unless otherwise noted.