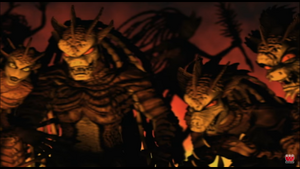 Alien Racers
The Ne'thels are an alien species from Ne'thel.

The Ne'thels are a predatory raptor race. A humanoid reptilian race with head tendrils, armored skin like a cheese grater, claws that can cut through hull metal and whip-like tails.

The Ne'thels are a primitive race. Their language only includes six words; five of which mean "kill".

Retrieved from "https://aliens.fandom.com/wiki/Ne%27thel?oldid=162322"
Community content is available under CC-BY-SA unless otherwise noted.