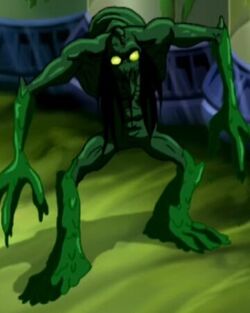 Martin Mystery
The Nazca Aliens are an unnamed species of sapient, hostile beings which arrived on Earth intending to invade and conquer the planet in ancient times.

Members of this species are tall humanoid bipeds with a hunched posture, dark green skin, tridactyl hands, glowing lime-green eyes and black hair. Their arms and legs are perpetually covered in ectoplasmic slime.

The Nazca aliens speak in robotic-like voices and are capable of telekinesis. Their foreheads glow when they're about to release a telekinetic discharge to attack.

The alien fleet arrived on Earth, specifically in Peru, approximately in 200 BC. The Peruvians managed to resist the invasion and trapped the aliens underground by creating the mystical Nazca Lines; giving the invaders no choice but to remain in suspended animation inside their buried ships, waiting for an opportunity to be released.

Retrieved from "https://aliens.fandom.com/wiki/Nazca_Alien?oldid=189601"
Community content is available under CC-BY-SA unless otherwise noted.