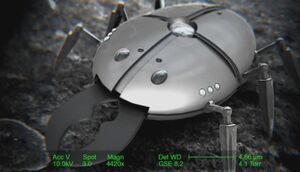 Nanoforms are minuscule robots similar in appearance to an Earth beetle, complete with a metallic ovoid body, three pairs of jointed legs, a pair of small eyes and two large insect-like mandibles. They are kept inactive under sub-zero temperatures.

They appeared in the Doctor Who spin-off The Sarah Jane Adventures.

Nanoforms were created by the Genetec Systems and their primary function was to deconstruct objects down to a molecular level in order to build them again in a new form. However, the Nanoforms didn't come out as expected, and were only capable of minor alterations, leading the company to forge their results. Later, a disguised Veil captured the Nanoforms and modified them, not only increasing their abilities but also allowing them to multiply and increase their numbers. The Veil programmed the Nanoforms to build a spaceship, so that he could escape from Earth and let the nanorobots run wild, destroying the planet's biosphere. Fortunately, this plan was foiled and the Nanoforms were deactivated.

Retrieved from "https://aliens.fandom.com/wiki/Nanoform?oldid=103245"
Community content is available under CC-BY-SA unless otherwise noted.