Ben 10
Nanochips (aka Microchips or Nanites) are a biomechanical alien species that operates in a hive.

Although they are traditionally blue, Nanochips can come in other colors. For example, the Decoy Queen and the drones she produced were red, yellow, and orange.

Nanochips are produced by a Nanochip Queen from her body, even when she is in control of another being.

Nanochip drones can take over another being by phasing through their bodies and plugging themselves into their brains.

Nanochips are capable of flight, and are very agile.

Nanochips are highly adaptable, and can sprout energy tentacles.

Nanochips can shape and form themselves at will, being able to control technology and create various structures.

Whenever they are not inhabiting a living being, Nanochip drones can assume the form of people or animated buildings.

A Nanochip Queen took up residence in the body of her father Victor Validus. The queen was destroyed by Ben Tennyson in the form of Nanomech. When the Nanochips returned, Ben and his team discovered the truth about the Hive, that Victor's daughter Elena was the host of the real Queen. The one Ben has previously destroyed was merely a decoy. After Elena destroyed her Nanochip body to save Ben, the Nanochips reactivated on their own.

At some later point, Elena disguised herself as Julie Yamamoto so she could have Ben for herself. When Ben discovered the truth, Elena used her Nanochip form to nearly suffocate him until the real Julie convinced her to let him go. Promising that she would return, Elena and the chips retreated into a sewer. Under unknown circumstances, Elena became separated from the Nanochips.[1]

A Nanochip created by the Decoy Queen 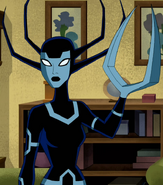