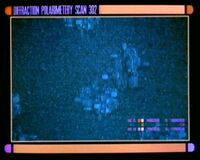 The Nanites are a race of sapient, microscopic robots, originally used by the United Federation of Planets for medical purposes. Created by atomic manipulation and containing several gigabytes of computer memory in their microscopic hardware, Nanites are small enough to enter the nuclei of living cells without causing harm. They are stored in non-functional state when not in use and can be destroyed by gamma radiation if necessary.

Until 2366, Nanites were considered non-intelligent. However in that year a scientific experiment on the Nanites of the starship USS Enterprise-D tried to enhance their capabilities by stimulating cooperative behavior among them. This eventually resulted in the Nanites developing a collective intelligence and escaping to the ship's systems, damaging them as the Nanites increased their numbers. Eventually, the android Data was able to reach an agreement with the Nanites: they fixed the damage and left the ship's systems and in return the Enterprise transported them to the uninhabited planet Kavis Alpha IV, where the Nanites could build their own civilization.

Retrieved from "https://aliens.fandom.com/wiki/Nanite_(Star_Trek)?oldid=180741"
Community content is available under CC-BY-SA unless otherwise noted.