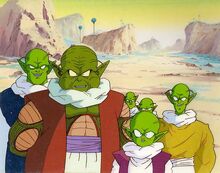 Namekians have green skin and antennae. Patches on their arms seem to indicate age; younger Namekians have pink arm patches, while elders instead have a dull orange coloration. Despite having masculine bodies, voices and behaviors, Namekians are actually genderless and can reproduce asexualy but can reproduce sexually if there are partners. Due to their asexual existence, any and all Namekians can reproduce by spitting out an egg through their mouth. These young are not genetic copies of the parent, despite what one might expect from an asexual race; rather it appears that the parent has some control over what type of child will be produced. This can be taken to the extreme, with the newborns able to come out mutated and not closely resembling others of their species.

They are unique in that they only require water for sustenance, but they do know what eating means. They have evolved on a world with three suns, with at least one up at all times, and therefore night is also unknown to them.

Their physiology grants them a wide variety of abilities, many of them magical in nature; however, since these abilities are mostly seen being used by important individuals and not civilians, it is unknown whether these techniques are common to the species or to the individual. It seems likely that the vast majority of these abilities are restricted to the fighter caste Namekians as opposed to the sage caste, as none of the normal Namekians have ever been seen displaying the abilities when facing a crisis such as Frieza's invasion.

At some point in the not-too-distant past, the Nameks were a well-known spacefaring race; this is determinate as the Saiyans who first arrived on Earth immediately recognized Piccolo as a Namek. This would have been an extremely unlikely circumstance if their species were only a primitive farming culture on a single planet. Other evidence of this is a small space capsule (with Namek-language voice recognition) that was sent to Earth with one of two Namekians prior to the genocide that was soon to occur.

One generation ago in Namek's past, a great tempest nearly eradicated the entire Namekian race, leaving only two survivors. Of these two, one remained on Namek to slowly repopulate the planet, while the other was sent to safety on Earth. Within one generation, just over 100 Namekians existed on their homeworld; at the same time, only a few existed on Earth.

Unfortunately, prosperity was not to occur for their species, and their world was soon invaded by the evil Frieza, who had come to search for the planet's Dragon Balls. At the same time, a number of Saiyans, Half-Saiyans, and Humans arrived to stop Frieza's forces, which eventually resulted in the complete destruction of Namek and a second near-extinction of the Namekian race. This was done as a last-ditch effort to kill the now-Super Saiyan Son Goku in their battle, as while Frieza species can survive in the vacuum of space, Goku's species cannot. By this time, most Namekians had already been killed by Frieza forces, but those who remained were temporarily transported to Earth by the Namekian Dragon. Once there, they lived for nearly a year before traveling back into space to resettle on a new homeworld, dubbed New Namek.

There are multiple different types of Namekians.

The Dragon clan Namekians are the strongest type as they appear to be able to create Dragon Balls. These Namekians can also heal, use magic and create mutated spawn.

Warrior Namekians are much better fighters than the others and have higher power levels. There are three types: Warriors, Shadow Knights, and Dark Warriors.

The Demon Clan was the name given to the spawns that King Piccolo produced. However, these spawns are actually Mutated Namekians that were corrupted by the heart of a high class Namekian. Evil Namekians and Elder Namekians are the only recorded types that have produced such beings. This includes: Guru and King Piccolo. It is unclear whether Piccolo Jr., Kami, Moori, or Lord Slug produce such eggs as well, but has yet to be disproved.

Though not as strong as a Saiyan's Ape Form, this form turns the Namekians gigantic and multiplies their power by ten. Namekians who demonstrate this form include: King Piccolo, Piccolo, Lord Slug, and others.

A Form only used by Piccolo during his climactic battle with Goku in Dragon Ball, the form is twice as strong as Great Namek but loses much speed due to its incredible size.

A Special form only used in Dragon Ball Online by the Dark Warrior of Group 2. This changes the Namekian's eye colour to red, makes them more muscular, and gives them purple aura. The form gives the user a fifty times power boost.

A Super Namek is a Namekian who has unlocked a high level of awareness and has fused with another powerful Namekian, Super Namek's sometimes split into good and evil parts for reasons unknown. Lord Slug is stated to be a Super Namek. Piccolo attains this form after fusing with Kami. The Namekians in Dragon Ball Heroes can also use this form, including Piccolo. This form is stated in the show to be stronger than a Super Saiyan in their first state.

Super Namek 2 is the strongest known form of Namekian, it is what happens when a Namekian fuses with a third powerful Namekian. Piccolo attains this form after fusing with King Piccolo. This form has only appeared in a video game. The Namekians in Dragon Ball Heroes can also use this form, including Piccolo. 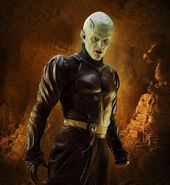