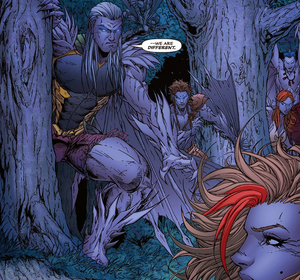 Soulfire
The Naitali were a race of magical vampires.

They were a vampiric species of magic-eaters. They were purple-skinned beings with bat-like wings under their arms and fangs.

The Naitali were regarded as a myth to the Sethoru and the Rahtumi. According to the stories, they were a race of fierce creatures that terrorized the magical community.

Thousands of years ago the Naitali were a scourge upon on the magical community of Earth, however they died out after magic disappeared with the death of the previous Samusara. After Malikai took up the mantle of the Samusara, magic was restored, bringing back many magical creatures that had lost their magic. Those who possessed recessive genes of the Naitali were changed into the forms of their ancestors.

Retrieved from "https://aliens.fandom.com/wiki/Naitali?oldid=181824"
Community content is available under CC-BY-SA unless otherwise noted.