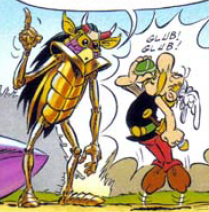 The Nagmas are a sapient, spacefaring alien species who visited Earth in the year 50 BC, when they were in the middle of a war against the Tadsylwiens. Physically, they resemble tall, yellow-skinned humanoids, and usually wear golden armor. They hail from a planet called Gmana.

While the Tadsylwiens fight with their armies of Superclones, the Nagmas prefer to create armies of deadly robots.

Retrieved from "https://aliens.fandom.com/wiki/Nagma?oldid=163147"
Community content is available under CC-BY-SA unless otherwise noted.