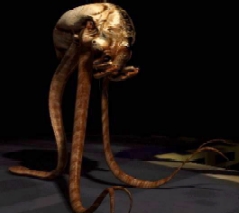 The Na'ka'leen Feeder is a terrestrial cephalopoid creature native to an unnamed planet in Centauri space, and is considered one of the most feared and dangerous lifeforms in the galaxy by the Centauri.

At least semi-sapient, the Na'ka'leen is able to communicate with other species using a common translator. It lays one of its tentacles on the skin of its victims, proceeding to feed on its neurotransmitter chemicals, essentially erasing the victim's mind and resulting on death.

The Na'ka'leen Feeder is a tall, slender invertebrate with a number of long tentacles and a tough exoskeleton; and is able to move with great agility. First encounter with this species resulted on it wiping out an entire Centauri colony, after which the beasts were kept under strict quarantine by the Centauri government. Brief lifting of this quarantine for budget reasons was enough to allow criminal smuggling of one Na'ka'leen to the Babylon 5 space station within a replica of a Vorlon suit, so as to pass the beast for a Vorlon. The criminal Deuce used the Vorlon-disguised Na'ka'leen to get rid of those who he considered a source of trouble. Upon hearing that a Na'ka'leen Feeder was aboard, the Centauri delegates of Babylon 5 literally locked themselves in their quarters, coming out only after confirmation that Garibaldi's security team had killed it; illustrating the fear the Centauri still have of this species.

Retrieved from "https://aliens.fandom.com/wiki/Na%27ka%27leen_Feeder?oldid=119824"
Community content is available under CC-BY-SA unless otherwise noted.