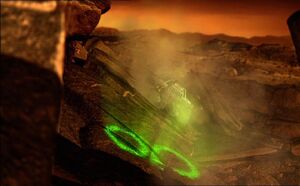 Captain Scarlet and the Mysterons

"Earthmen...we are peaceful beings. And you have tried to destroy us. But you cannot succeed. You and your people will pay for this act of aggression. "This is the voice of the Mysterons. We know that you can hear us, Earthmen. Our retaliation will be slow, but nonetheless effective. It will mean the ultimate destruction of life on Earth. It will be useless for you to resist, for we have discovered the secret of reversing matter...as you have just witnessed. "One of you will be under our control. (It was quickly made obvious that the Mysterons meant Captain Black, for he had been responsible for the unprovoked attack that had just been made.) YOU will be instrumental in avenging the Mysterons. OUR FIRST ACT OF RETALIATION WILL BE TO ASSASSINATE YOUR WORLD PRESIDENT."

The Mysterons a race native to the planet Mars, which appear in the British science-fiction Supermarionation television series Captain Scarlet and the Mysterons (1967) (and Gerry Anderson's New Captain Scarlet (2005), symbolised by ubiquitous projected green rings and the deep bass voice of their human convert, Captain Black.

Captain Scarlet and the Mysterons (1967)Edit

Hostilities between Earth and the Mysterons commence following a Zero-X expedition on Mars led by Captain Black of the Earth security organisation Spectrum. The purpose of the mission had been to locate the source of radio signals that Spectrum had detected emanating from the planet. The Zero-X astronauts discover an alien city complex on the Martian surface. After mistaking a surveillance camera for a weapons placement, Black fears an attack and, in violation of his orders, launches an assault on the complex that destroys it completely. However, the city is almost immediately rebuilt before their eyes as a blue beam of light passes over the ruins. Identifying themselves as the Mysterons, the aliens claim to have discovered the secret of "reversing matter" (a power later referred to as "retrometabolism"). They have the ability to alter matter (using some sort of teleportation technology), to heal any physical injury, and to re-create the exact likeness of any object or person – a power they can exercise only after the original object has been destroyed or the original person killed. Dedicating themselves to a "slow, but nonetheless effective" retaliation for the unprovoked attack on their Martian complex, the Mysterons seize telepathic control of Black and return him to Earth, making him instrumental in avenging the Mysterons by recruiting other persons and objects in a similar fashion. However, the Mysterons' attempt to assassinate the World President – for the purposes of which they kill and re-create Spectrum's foremost agent, Captain Scarlet, as an indestructible doppelganger – fails when a kidnapping of the president is foiled and the Scarlet reconstruction falls to its apparent death from the top of a tower, later regaining the consciousness of the original, human officer (how this happens is never explained in the series canon).

The Mysterons themselves are never seen on screen. They broadcast their threats by radio, often disguising their intentions with word play- such as stating that they will 'Kill Time' when they intend to kill a major Spanish official whose surname is 'Tiempo' (Spanish for 'Time')-, and are represented visually only by twin rings of green light, suggestive of eyes, that they project onto scenes of murder and destruction of their making from which likenesses emerge. The Mysteron likenesses created are impervious to X-Rays- showing up on X-Rays as though they were conventional photographs- and can only be destroyed by massive amounts of electricity. The recreation process they use only requires the subject to be clinically dead before the copy is created, with Spectrum once setting a trap by utilizing a major that the Mysterons had attempted to kill who had been resuscitated in hospital after he had been recreated. Anderson originally intended the Mysterons to be more conventional Martians, later choosing to make them effectively invisible so that the series would not feel dated. The TV Century 21 comic book depicted the Mysterons as both energy beings and a computer collective.

The final episode of the re-imagined series, Gerry Anderson's New Captain Scarlet, reveals a great deal about the Mysterons as they exist in the version of the new series. They live in a city on Mars that is normally hidden from view. The city appears on the surface of Mars for the first time in 2068, during the ill-fated mission commanded by Captain Black (Instrument of Destruction, Part 1). They are categorically stated to be energy beings, with one being shown to be capable of transforming into the "green rings", and are to some extent individualised – there is a dissenting faction in the "Mysteron consciousness" (as a member of the faction puts it) that believes that, given time, humans will outgrow their destructive impulses and become more like the Mysterons themselves. Unfortunately for the series' protagonists, this group has virtually no influence, and their only agent dispatched to Earth was quickly de-corporalised and remanded into Mysteron custody by the majority group's primary agent, Black.

The Mysterons were first discovered by Spectrum captains Scarlet and Black during an investigation into the source of strange signals emanating from Mars. They appear as a pair of green rings; however, it is not known whether this is the result of technology. The Mysterons claim to be peaceful beings, but are wage a "war of nerves" against the people of Earth following Black's devastating assault on the Mysteron city. The Mysterons possess the ability to reconstruct exact replicas of objects or persons. It is due to this remarkable ability that they are able to re-create their city following Black's attack. They also employ this power from time to time during the "Mysteronisation" process, which imbues the reconstruction (dubbed "replicant" by Spectrum) with the power of "retro-metabolisation" – the replicant is able to heal completely from almost any injury, including fatal ones. The only known survivor of the process is Scarlet, who retains his retro-metabolism and remains virtually indestructible, an ability which is a great asset in his work. Mysterons are also able to control the minds of their human victims, whether the subject has been replicated or not. Mysterons make use of hypnosis for short-term control, as demonstrated by the replicant of Commander Lewis on Doctor Gold ("The Homecoming"). To create a full agent, they use the reconstruction process which leaves them in total control of the victim's body.

The Mysteronisation process alters the replicants at the sub-atomic level and subtly alters their genetic code. It is this alteration of DNA that leaves them vulnerable to detection, and as such all Spectrum personnel are subject to regular DNA checking.

Retrieved from "https://aliens.fandom.com/wiki/Mysteron?oldid=179558"
Community content is available under CC-BY-SA unless otherwise noted.