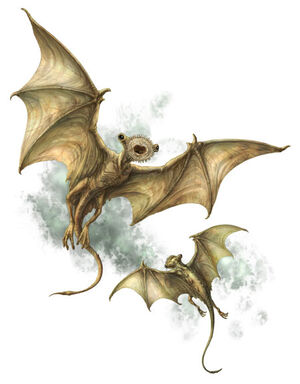 Mynocks are silicon-based parasite like organisms that thrive in asteroid fields. They often attach themselves to the hulls of spacecraft and drain power and minerals in order to nourish themselves. While they prefer the vacuum of space, they can use their wings to navigate the atmospheres of many planets, (except those that contain helium, which they are deadly allergic to). In the presence of helium, they will inflate like a balloon dangerously to the point of bursting. Mynocks are an incredibly adaptable species; many varieties exist across just as many planets. They often flock together, and aggressively protect any territory they occupy. It is unknown how they can communiucate, although it has been theorized that this is accomplished through pheromones or telepathy.