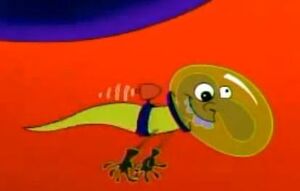 Mustafa al Bacterius is extremely small in size, able to venture into a human body through a hole the size of a hair. He has a serpentine-like body with a human head, the nose ridiculously large. He wears a yellowish space suit, with a small rocket pack on the back, and a space helmet around his head.

Mustafa al Bacterius is easily capable of traveling through space with little effort. He is shown to easily take control of a human's nervous system by hacking the brain of his host. He can control all bodily functions from within the brain. It is possible that Mustafa al Bacteius get to the brain of Muriel Bagge, and later to Eustace Bagge.

Mustafa al Bacterius has a liking of sabotage, and will easily get control of someone else to do so. He doesn't like how humans were starting to 'mess with space' as well as Earth.

In the Episode[edit | edit source]

It start in the rocket when Mustafa al Bacterius cut a circle on it.  Then he use a drill to go through to Muriel. Then they go to the brain, and press the button which lead to Muriel's eyebrow to move. Still pressing and Muriel say, Birds and then Mustafa again pressing which leading "And how about, wiki, wiki, wiki, bamboo time." Continued to press and the switch get, Muriel hair came out, and the beard appear, Eustace say, "What's hey." Courage scared. Later her beard removed and the giant hair came out and switch to normal. Muriel stretch Eustace Ears then the nose, and pluck the nose hair. Muriel hit the head with a hand, and fight. Eustace cried. Muriel expand and collapse and then eat the table, made Muriel very fighting, saying in a Kung Fu mode "Come on, come on and fight." And she want to sleep so she was going to climb up and walk in the ceiling. While Muriel was sleeping. The switch was break.

Retrieved from "https://aliens.fandom.com/wiki/Mustafa_al_Bacterius?oldid=186014"
Community content is available under CC-BY-SA unless otherwise noted.