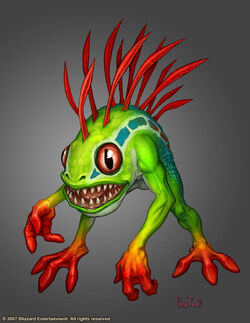 6 ft, but walk with a hunch

Murlocs are a bipedal, amphibious humanoid race residing along coastlines, lakeshores, and riverbeds. Murlocs possess bulbous bodies, large mouths lined with rows of sharp fangs, and slime-coated skin. Individuals range in coloration from turquoise to darkish grey, while their heights vary from 3-1/2 feet to 6 feet. Depending on the variety, murlocs may lean towards a closer resemblance to frogs or to fish; the iconic green murlock, for example, has coloration similar the Cuban Tree frog.

They are able to live in either fresh-water or salt water. Their supposed intelligence has been debated. Some argue that since their guttural language is impossibly difficult to decipher, they have limited intelligence. However, their use of weaponry and uncanny fighting abilities imply a rather sinister racial intellect. Murlocs tend to dwell in amply-populated coastal settlements, and it is unusual to find individuals wandering too far from their compatriots. They organize into small tribes and larger clans. The clans can muster their tribes into a fighting force when needed for invasion. Rarely, clans join each other to form larger forces. It is possible that all Murlocs use clams as currency, as the Winterfin tribe do.

Murloc history is largely unknown since most of their lore consists of their own oral tradition, which itself seems to be rote repetitions of unpronounceable forefathers. Murlocs speak Nerglish, a language shared by the Makura. There are recorded instances of Murlocs capable of more structured speech; nonetheless, most of the currently accepted knowledge of Murlocs comes from outside observation.

Much of what is known about Murlocs is readily observable by any traveler. As noted earlier, murlocs tend to congregate on shorelines in densely-populated camps and villages. They have been known, in certain cases, to worship enigmatic sea-deities (including Naga). Most importantly, the majority of Murloc tribes seem to harbor very little tolerance for most other sapient races.

"When faced with the products of a technologically superior culture, the Blacksilt displayed none of the curiosity characteristic of emerging cultures in humanoid species."
―Clopper Wizbang, Explorers' League

Murloc faith is strange. Some accounts report that religion plays a dominant role in their society, though they do not revere a single, common deity (to our knowledge, at least). Their religion is then polytheistic, animistic, and even a bit shamanistic. They have rituals involving communication with the sea and its powers, and they worship the water and the powerful entities within it. Murloc beliefs incorporate powerful creatures that live around them, and their pantheons are dynamic, changing to include new creatures they encounter. They may add or remove creatures to their worship structure to reflect recent events. A tribe may venerate a whale (or may even raise its status to whale-god) until a giant sea serpent drives it away, at which point their beliefs change to center on the sea serpent as the chief object of their reverence. Another tribe may worship a Naga sea witch until she is killed by sharks, at which point she is replaced by the sharks. A nearby creature that exemplifies Murloc values — such as a strong shark or a quick fish — becomes a living symbol of the Murloc faith. As the animals die or move on, the Murloc faith mutates to find new symbolism in their surroundings. Some are known to revere the Deep Mother, a representation of the ocean. All things in the water are her children. Though Murlocs have not been observed to unite behind a single deity, some rumors claim that all Murlocs revere an entity called "the One in the Deeps" However,it is unclear whether this is also a representation of the ocean or if it is even entity at all.

Murloc villages consist of a collection of rough mud-and-twig huts strewn about without pattern. These villages typically have no fire, no clear walkways, and no fortifications. The huts are crude and plain, and the settlement is otherwise featureless except for the shallow basin often found behind the shaman's hut. Most huts stand on stilts to protect them from the tides and flooding.

In sharp contrast to their primitive exteriors, the interior walls of most Murloc huts are often elaborately decorated. Some depict branching coral while others contain mosaics of shell and stone and yet others possess surprisingly delicate tapestries of shaded seaweed. The huts are usually open to the air, with small wooden pillars to hold the roof. Murlocs sleep in the water or on woven mats of seaweed, tied firmly enough to maintain their shape but still loose enough to look like small rectangular nets. Hooks of coral hold weapons and other items on the walls or pillars.

Murlocs rarely work in metal and almost never touch fire. They are expert carvers, however, and can work stone, shell, coral, or wood into fabulous shapes and amazing scenes and designs. One such example is a lifelike piranha carved from a short piece of coral. Shaman staffs are also works of art, carved to hold bone and shell chips as well as teeth, flippers, and claws of various sea creatures not seen by most land dwellers. The Blacksilt Murlocs of the Bloodmyst Isle are also known for their stone-carved idols.

Murlocs don't trade these items, though; they typically trade only shells and seaweed and other raw materials (in the case of the Winterfin Murlocs, unopened clams). It is claimed that they sometimes award traders with their artwork after particularly good trades.