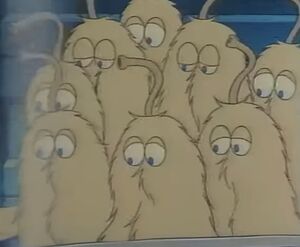 Mupples are a non-sapient species of small, furry creatures native to a galaxy far, far away. They are consumed as food and considered a prized delicacy in some planets.

Mupples are small creatures entirely covered in shaggy light-grey fur. They have two furry tentacles, a small tubular antenna on top of their heads, and a pair of large blue eyes with white sclerae.

Despite their friendly and harmless behaviour, they're prone to becoming agitated, although they can be soothed by soft music.

Retrieved from "https://aliens.fandom.com/wiki/Mupple?oldid=187013"
Community content is available under CC-BY-SA unless otherwise noted.