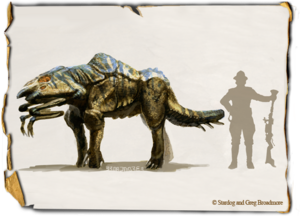 Dr. Grordbort's Universe
Mumford's Royal Toop is a species native to Venus. The species is named after Sir Basil F. Mumford, who discovered them.

Toops are usually docile, but if they are cornered, they pose a considerable threat to humans. In defense, they use the arms located on their heads. Despite this, they have been hunted by humans to near-extinction.

On top of their head, there are sensors, which are not comparable to any receptors of earths animals. These are used to find food, which is grabbed by their arms.

Retrieved from "https://aliens.fandom.com/wiki/Mumford%27s_Royal_Toop?oldid=178411"
Community content is available under CC-BY-SA unless otherwise noted.