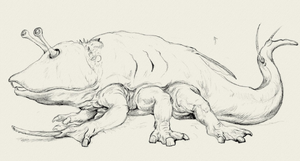 Extraterrestrial
The Mudpod is a small amphibious creature native to planet Aurelia.

The Mudpod is a 1 meter long amphibious creature that inhabits the swamps of Aurelia. They have three pairs of legs and a long tail for swimming. Their eyestalks allow them to watch for predators above the water surface. They also have poisonus spines for defense.

Mudpods are centrally essential animals. They build dams that block rivers and create deltas for the wildlife to prosper. They feed on Stinger Fans and kill many, but also make room for the new generation. Mudpods are hunted by Gulphogs, which hunt them in groups. Mudpods have no warning of solar flares and their only defense is to crawl into their burrows.

Retrieved from "https://aliens.fandom.com/wiki/Mudpod?oldid=194073"
Community content is available under CC-BY-SA unless otherwise noted.