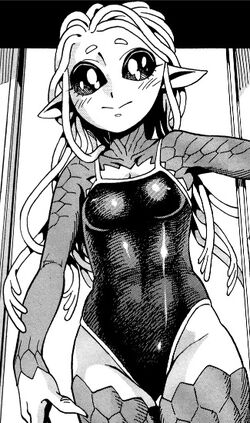 Mrs. Makabe is the alien wife of a Human abductee named Nobuo Makabe. She's also a hybrid, whose parents belong to very distinct species; and has inherited the basic humanoid body plan of her mother and the tentacles and optic blast abilities of her father.

Mrs. Makabe is a humanoid alien with extendable prehensile tentacles for hair, and is capable of communicating by telepathy. She has pointed ears, four-fingered hands and large glossy eyes. Her arms, legs and shoulders are covered in scales. Alcohol has the same effect on her biology as it does in Humans. When she cries she produces warping beams from her eyes rather than tears (a biological trait inherited from her father, along with the tentacles and telepathy).

Her tentacles end in manipulatory hand-like appendages and are strong enough to lift objects of considerable weight with little to no effort. It has been stated that she is in fact more dexterous in handling objects with these tentacles than with her actual hands. She is genetically compatible with Humans and needs to enclose herself in a kind of cocoon in order to give birth.

Mrs. Makabe was born and raised in an advanced society made up of several different species, and at one point enrolled in a kind of academy for aliens planning to visit the planet Earth, therefore learning about some of the customs of Humans, which differed from those with which she was accustomed (e.g. the fact that Humans wear clothes).

After that, she eventually found herself traveling to Earth in a multi-species spaceship which abducted Nobuo. The other aliens urged her to perform some kind of implant in the abductee, which was part of a ritual that would make her an adult. However, as soon as Nobuo laid eyes on his captor, he fell in love and proposed to her, much to the other aliens' shock.

After marrying Nobuo and taking up residence on Earth (using a Human disguise to hide her actual appearance), she eventually became pregnant and cocooned herself to give birth to their hybrid son, Asora.

Retrieved from "https://aliens.fandom.com/wiki/Mrs._Makabe?oldid=157825"
Community content is available under CC-BY-SA unless otherwise noted.