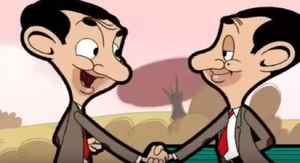 Rowan Atkinson, Richard Curtis and Ben Elton
Mr. Bean's Species is an unnamed race of spacefaring humanoids who all seem to look (and dress) identical. A member of this species, Mr. Bean, has been living on Earth as a Human, although his eccentric behaviour is prone to generating strange and awkward situations, which often result in trouble being caused. 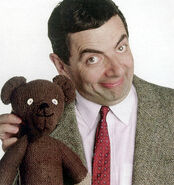 Mr. Bean being beamed down in the live action series

Mr. Bean standing up after being beamed down

Mr. Bean watches the UFO from his car

Mr. Bean walks aboard the UFO

All of the Mr. Bean aliens

Mr. Bean looking out of the UFO's window

Mr. Bean being beamed to earth in the animated series
Add a photo to this gallery

Retrieved from "https://aliens.fandom.com/wiki/Mr._Bean%27s_Species?oldid=200250"
Community content is available under CC-BY-SA unless otherwise noted.