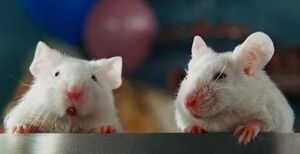 Humanoid (in their native realm)
Murine (in our realm)

Bipedal (in their native realm)
Quadrupedal (in our realm)

The life forms that Humans refer to as Mice (singular: Mouse) are, unbeknownst to mankind, the most intelligent species on Earth, and not actually native to the planet. They are in fact hyper-intelligent pan-dimensional creatures whose rodent aspect represents merely a three-dimensional projection of their actual form.

Billions of years ago, they have been responsible for creating the supercomputer known as Deep Thought, and also for hiring the Magratheans to build the planet that would become known as Earth - actually an even more impressive and massive supercomputer designed by Deep Thought.

It has been noted that their physical manifestation in their own dimension isn't dissimilar to out own, implying that they could be described as humanoid. It's possible that they can grow extra limbs, as this is required by the rules of Brockian Ultra-Cricket, which they play.

In spite of being described as "pan-dimensional", these creatures appear to experience time linearly, as Deep Thought tells them "you know nothing of future time". The fact that they need to wait for Deep Thought to reveal the answers to their questions also suggests so.

Despite being a tremendously advanced civilization, the inhabitants of the higher dimensions have been described as brutal, which can be observed in their favorite pastime of Brockian Ultra-Cricket. Not only is this game based on memories of the Krikkiters' galactic wars of devastation (much the same as Earth cricket), but it's also indiscriminately violent, as it basically consists of hitting opponents with any object available and then running away to apologize through a megafone.

Curiously, however, members of this pan-dimensional species also appear to be a deeply philosophical lot, so much that before the creation of Deep Thought they would often find themselves bickering about the meaning of life and existence, and such discussions often went as far as to interrupt their Ultra-Cricket matches, much to their own frustration.

Retrieved from "https://aliens.fandom.com/wiki/Mouse_(The_Hitchhiker%27s_Guide_to_the_Galaxy)?oldid=195356"
Community content is available under CC-BY-SA unless otherwise noted.