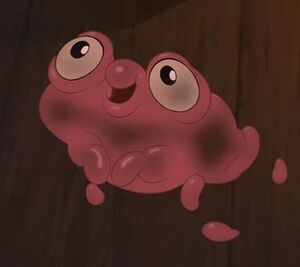 Treasure Planet
A Morph is a species of small, floating creatures which can shapeshift and mimic the appearance of any other life form or object, as well as imitate voices to some extent; although they aren't capable of changing their size.

Morphs are very docile creatures and seem to possess a great deal of understanding of complex situations; suggesting that they're most likely semi-sapient.

In their natural state, they appear as a floating amorphous glob of pink gel with a mouth and a pair of bulging eyes. Their bodies are not solid, and they often keep smaller bubble-like portions of themselves floating freely around them by unknown means.

The infamous cyborg pirate John Silver rescued a Morph on Proteus I and kept it as a loyal pet.

After arriving on the legendary Treasure Planet; Silver leads a mutiny to take control of the ship and Morph accidentally plays up an important role when he playfully disguises himself as the treasure map and is taken by Jim Hawkins; causing Silver and the pirates to believe that Hawkins has the map. After witnessing his owner's violent and arrogant behavior, Morph changes sides and becomes one of Hawkins companions. However, he eventually forgives his redeemed ex-owner Silver, who gives Morph to Hawkins and departs alone for new adventures.

Retrieved from "https://aliens.fandom.com/wiki/Morph?oldid=188112"
Community content is available under CC-BY-SA unless otherwise noted.