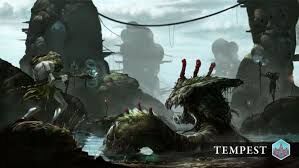 Endless Universe
The Morgawr are a race of mutated sea-dwellers from Endless Legends.

The Morgawr were originally lab specimens created in the laboratories of the Endless at the bottom of the seas of Auriga. They resemble mutated misshapen humanoids with various pieces of sea-life attached to them. They possesse telepathic powers that allow them to take over the minds of other races.

Due to their nature as an aquatic race, they never developed the concept of fire. However they managed to smelt metals complex industrial processes under the sea. In addition to continue their evolution they have left the seas to seek and conquer all of Auriga.

Their society is made of various individuals who have a strong mental connection. They are able to think and decide simultaneously together, possessing a collective mind of sorts.

Retrieved from "https://aliens.fandom.com/wiki/Morgawr?oldid=172720"
Community content is available under CC-BY-SA unless otherwise noted.