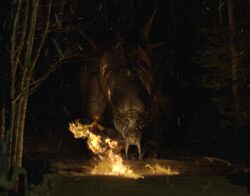 Outlander
The Moorwens are a race of bio-luminescent predators native to the Moorwen Planet.

Due to the bombing of their planet and subsequent hunting down of survivors, they are presumed to be extinct as of the Earth year 709 A.D. However, since at least one of the Moorwens managed to survive this initial extermination attempt, the possibility of a continued existence of a population created by other such remnant individuals cannot be ruled out.

Moorwens are a super-predator native to the planet holding the same name. Their planet, being large and naturally hospitable to life, was considered a prime colonization site for an interstellar civilization that considered Earth to be an 'abandoned seed colony.' Massive, ferocious, creatures, moving almost faster than Human eyes could follow, the Moorwen presence on the world meant that it was impossible to immediately settle the planet. As such the colonizers conducted a carpet-bombing of the world followed by a methodical hunt to eliminate the surviving Moorwen.

Once the colonists presumed the Moorwen to have been eliminated, the world was colonized. Some of those who had hunted the Moorwen were paid in land upon the freshly colonized world. Thinking themselves safe, the warriors departed (presumably for more work, though this goes unspecified). When they returned, they discovered that one of the Moorwen had survived, and had succeeded in utterly destroying one of the compounds.

The warriors departed the world with the bodies of the slain colonists, but the last Moorwen had managed to board the craft as well. It proceeded to kill all of the crew except for the soldier Kainan, resulting in the vessel crashing in Scandinavia, Earth, circa 709 AD. The Moorwen proceeded to terrorize the local villages, inflicting heavy losses on the indigenous human population. Kainan, with the help of the remaining Norse warriors, hunted and killed it along with its offspring. The single offspring seen on screen was decapitated; the larger individual fell off a tall cliff and into the ocean. As such, its current whereabouts are unknown.

The current status of the Moorwen on its home planet is unknown; the vast majority of the population (quoted to be in the millions) was exterminated in the Outlanders' colonization attempt. However, at least one Moorwen survived this genocide and was able to produce viable offspring (other species native to the planet had survived this carpet bombing as well). Whether or not recolonization was attempted once the non-native population was killed by this survivor is unknown. Therefore, the possibility of the continued existence of the Moorwen species through re-population by other survivors cannot be ruled out. 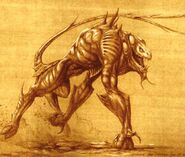 The Last Moorwen About To Die