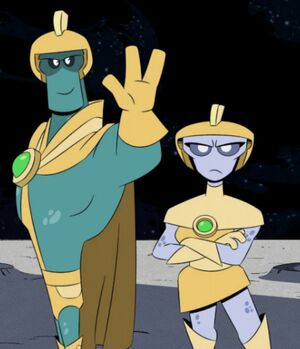 DuckTales
The Moonlanders are an alien species that inhabits the Earth's moon.

The Moonlanders are a humanoid species, three fingered with white pupils.

So far they appear to be a militant culture, with great pride of the Moon, holding the misbelief that it's a planet. They inhabit the city of Tranquility which is dug into the Moon in a stereotypical crescent hidden behind a hologram. They have been in conflict with a creature known as the Moon Mite.

Add a photo to this gallery
Retrieved from "https://aliens.fandom.com/wiki/Moonlander?oldid=154421"
Community content is available under CC-BY-SA unless otherwise noted.