Alien Species
Register
Don't have an account?
Sign In
Advertisement
in: Track of the Moon Beast Universe, Non-Sapient Beings, Predators,
and 7 more

You may be looking for Moon-Beast 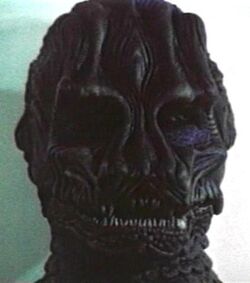 Track of the Moon Beast
Moon Beasts are reptilianoid organisms that are only known to be created if a meteorite from Luna ends up embedded in an organism's body, causing a therianthropic change during the night when the moon is out. The transformations will cause a sapient organism to lose all trace of its "humanity" and go on murderous yet completely random rampages. At the same time, the true form of a Moon Beast will be subject to spells of dizziness and nausea.

One becoming a Moon Beast is not a permanent ability, however, and the meteorite fragments will quickly disintegrate into the host's system, causing them to spontaneously combust. Their armored scale plating is impervious to most conventional weaponry, although shards of lunar rock such as the originating meteorite will pierce their hide, in a similar fashion to how werewolves are said to be weak to silver, although very likely for a completely different reason altogether.

Only two Moon Beasts are known to have existed, both having originated on Earth.