You may be looking for Moon Beast. 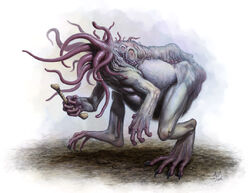 H. P. Lovecraft
Moon-Beasts are great grayish-white slippery organisms capable of contracting and expanding their mass at will. While it often changes, their principal shape is that of a sort of toad-like creature without any eyes and a curious, vibrating mass of short pink tentacles on the end of its blunt, vague snout. They are apparently indigenous to the dark side of the Dreamland's moon, which - unlike the moon of the waking world - has great forests and oily seas.

As sapient beings, they are known to sail black galleys between the moon and the Dreamlands, where they trade rubies for both slaves and gold at the port of Dylath-Leen. It is in this location that they will employ their Men of Leng, disguised in turbans, as their go-betweens while the Moon-Beasts themselves will remain hidden below deck, lest the Dylath-Leenian merchants discover the terrible secret of with whom they have been dealing.

The Moon-Beasts also have a permanent settlement at the Nameless Rock, an island composed of jagged granite near Inganok in the Cerenerian Sea. Sometimes bought slaves will be brought here for undecipherable reasons. The Nameless Rock garners avoidance through superstitions carried by those aboard passing ships because of strange howls that sometimes emanate from the location during the night. 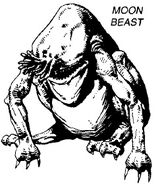 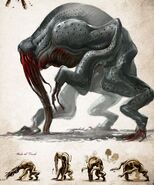