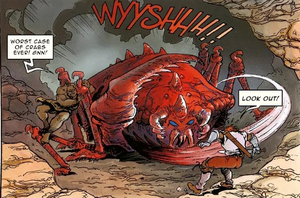 Monster-Crabs are giant crustaceans the size of a house. They are fierce hunters on land as well as on sea. These formidable fighting machines eat mainly fish and occasionally each other. Warm blooded creatures are a delicacy for them. Their upper chitinous armor is near impenetrable though it has a soft underbelly.

Retrieved from "https://aliens.fandom.com/wiki/Monster-Crab?oldid=171778"
Community content is available under CC-BY-SA unless otherwise noted.